In our Gonzo’s Quest slot review, it is a particularly well-designed slot game from one of the most popular game providers, NetEnt, which calls it “its first platinum video slot game.”

The game is visually appealing, has smooth and quick animations, and allows players to win big, especially when the Free Falls feature is activated, which increases the win multiplier.

These are just a few of the reasons why Gonzo’s Quest became popular almost quickly after its release in 2010 and is still a favorite of many players today.

1. The Theme and Storyline in Gonzo’s Quest Slot

Gonzo’s Quest is set in 1541 and tells the story of Gonzo the Conquistador. On a galleon, this explorer arrives on the Peruvian coast and decides to abandon ship in search of Eldorado, the lost city of gold. He steals a treasure map, leaps from the ship, and sets out on his adventure. All of this is shown in the game’s introduction.

Gonzo poses beside the game’s reels at the end of the intro, becoming a recurring feature of Gonzo’s Quest. He doesn’t change the outcomes of the spins, but when you hit a big win, he joins you in celebrating.

The game’s theme is inspired by the Inca culture, which is known for its unique architecture and art. The game’s background is made up of architecture, while the famous Inca masks serve as symbols, accompanied by likenesses of wild animals made in a similar style. Overall, Gonzo’s Quest is a truly unique gaming experience.

2. The Graphic, Sounds and Animation in Gonzo’s Quest

Gonzo’s Quest’s popularity stems in part from its excellent graphics and fluid animations. The gameplay is fast and furious, which adds to the excitement of playing this game.

You can hear the sounds of blocks falling onto the reels while hoping that one of them will form a new winning combination and start another avalanche.

There is, however, one issue that many players have. When using the Autoplay feature, the animations are a little too fast. Many players enjoy analyzing new symbols that appear on the reels to determine what they require to form another winning combination.

When using Autoplay, this is nearly impossible, which is a shame because it reduces the amount of fun some players have while playing Gonzo’s Quest.

Gonzo’s Quest is a wonderful game with a great mix of animations, 3D effects, and sounds that make it a very enjoyable experience to play, as can be said of many other NetEnt games.

3. The Gameplay in Gonzo’s Quest

With the way the game is designed, Gonzo’s Quest stands out among other slots. Instead of traditional reels, the game has an Avalanche feature, in which symbols fall from the top into the reels.

Symbols that make up a winning combination are destroyed, making room for new symbols to fall from the top.

Multiple consecutive wins can be achieved in the same game round thanks to the Avalanche feature. Furthermore, the multiplier increases as new symbols are added to the reels.

A 1x multiplier is applied to each spin (with the exception of free spins). It can then increase to 2x, 3x, and finally 5x with consecutive wins in the same game round, which is the maximum multiplier that can be achieved outside of the free spins feature.

There are 20 winlines and five “reels” with three symbols each. The number of active winlines cannot be changed; it is always “locked” at 20.

This eliminates Gonzo’s Quest from some of our slot machine strategies, but it makes sense because the Avalanche feature, which is one of the game’s main attractions, wouldn’t work as well with fewer winlines. Winning combinations must appear in order from left to right on a winline.

In the game, there are seven standard symbols. Because of the abstract nature of the game, they’re a little difficult to describe, so I’ll include a picture. There is a Free Fall symbol and a Wild symbol in addition to the seven regular symbols.

The Avalanche feature is partly responsible for the game’s popularity. Gonzo’s Quest’s gameplay revolves around it, and it’s what makes the game so much more interesting and thrilling to play.

It’s exciting to hit multiple consecutive wins in a single game round, only to watch the multiplier rise and hope for another big win with a mix of old and new symbols that have fallen onto the reels.

4. The Free Spins in Gonzo’s Quest

This makes the Free Falls much more difficult to hit, but it also opens up the possibility of triggering many more that symbol at once. Each winline with three Free Fall symbols awards ten free spins, so if you manage to line them up on multiple winlines, you’ll get a lot more free spins.

As a result, each symbol begins at 3x and can increase to 6x, 9x, and 15x. This means that you can win a lot of money during the Free Falls.

That  feature is especially striking to players, both in terms of a unique experience and the potential for a large payout. However, because the Free Fall symbols, like all other symbols which must form a winning combination on a winline, it can be difficult to hit.

Gonzo’s Quest has this as its main flaw. It only has one unique feature that isn’t used very often.

There are no other bonus features or a jackpot in this game. For some players, this can become tedious, especially after they’ve played some of the newer games with multiple special features that can be triggered at any time.

5. The Bet and Win Sizes

Gonzo’s Quest has a $0.2 minimum bet ($0.01 per winline) and a $50 maximum bet ($2.5 per winline). Of course, in casinos that accept other currencies, the maximum and minimum bets in Gonzo’s Quest Slot will differ. The “Coin value” and “Bet level” buttons let you control the size of your bet.

That’s 125x the total bet, which isn’t quite as high as some other slots, but keep in mind the possibility of a multiplier.

Furthermore, keep in mind that there are always 20 active winlines, and thanks to the Avalanche feature, you can win multiple times in a single game round. Of course, as with any other video slot game, huge wins like the ones we mentioned are extremely rare.

The RTP (return to player) for Gonzo’s Quest is 96 percent. That means that for every $1 wagered, you can expect to “win” $0.96. Of course, this value is only effective statistically and over time, so your results may differ.

In the world of online slots, a return to player (RTP) of 96 percent is considered average. That means there are games that are worse for the player in the long run, but there are also a lot of slot games that have a higher RTP.

Gonzo’s Quest is a medium variance game when it comes to volatility (variance). That means, in comparison to other video slots, the game tends to award medium-sized wins with a medium frequency.

The Conclusion of Gonzo’s Quest

The conclusion for our Gonzo’s Quest slot review, it is a popular and entertaining online slot that has a long history in the world of video slots. Thanks to the Avalanche feature, it was one of the first (if not the first) games of its kind.

Its medium volatility ensures that you win something every now and then, while also giving you a good chance of hitting a big win, thanks to the Free Falls feature.

The RTP of 96 percent, on the other hand, indicates that there are games that are better for the player; however, this value can be considered average and is nothing to be ashamed of. As previously stated, some players (including myself) would appreciate additional bonus features, as the game can become boring and repetitive after a while.

This slot game is also available for demo version. You can check Gonzo’s Quest slot demo version before joining the game.

Gonzo’s Gold from NetEnt promises a new treasure hunt! There’s a new temple to discover, and Gonzo is on his way back to El Dorado to look for gold across a new 5×5-reel grid with Clusters Pay.

Gonzo’s Gold, despite being based on one of NetEnt’s most popular slots, lacks the customary charm and extra features. However, for new players, the easy gameplay with a decent maximum potential will be a good introduction to Gonzo’s world. 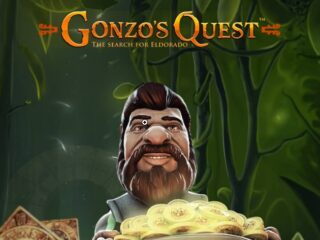 Pros :
– Wins of up to 6,500 times your bet are possible.
– Symbols are expanding.
– The free spins are retriggerable.

Get the latest information about us on social media

Connect with us and we will have fun with anything that can be fun. Time to enjoy life..